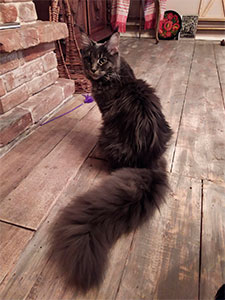 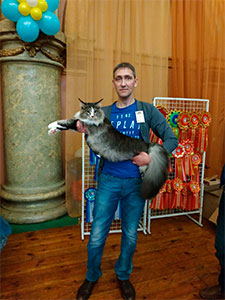 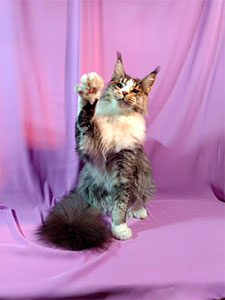 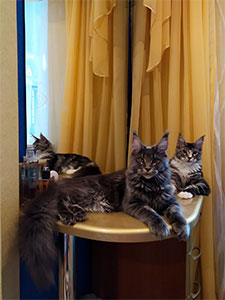 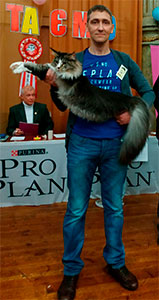 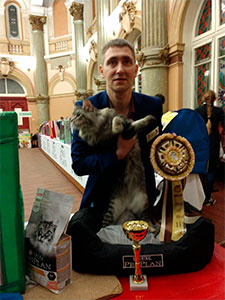 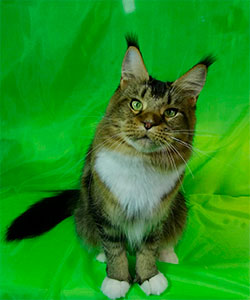 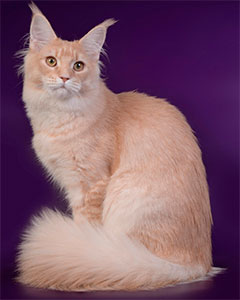 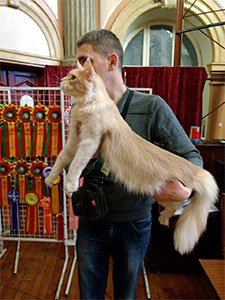 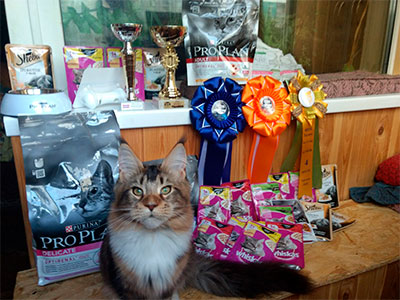 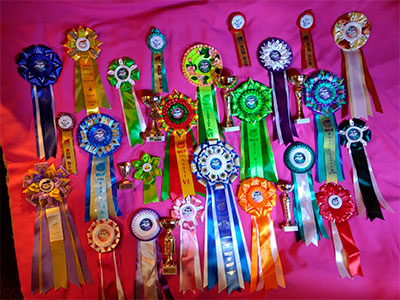 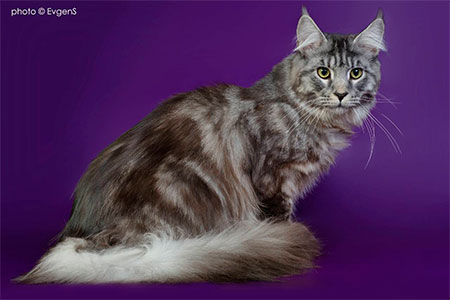 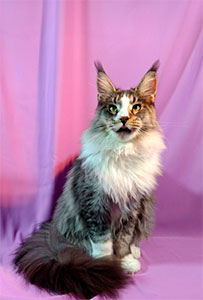 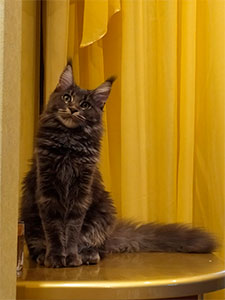 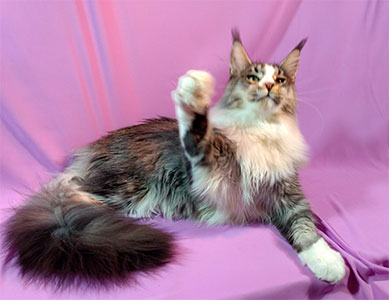 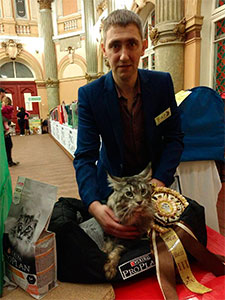 Everything you need to know about Maine Coon Cats breeding 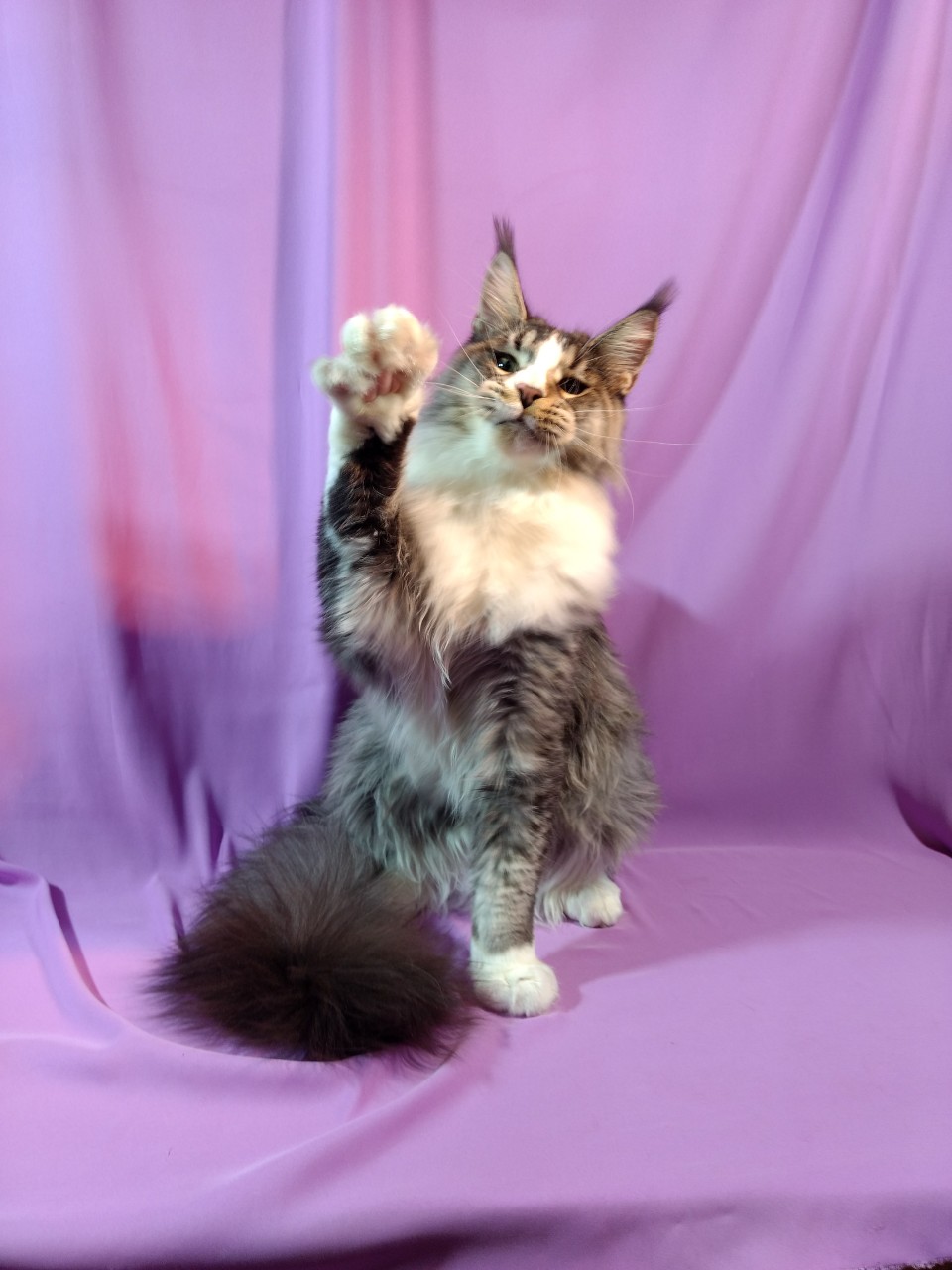 Maine Coon cats have luxurious coat, impressive size and friendly temper. These representatives of the largest breed of domestic raccoon cats have been known for several centuries and are very popular. According to the standard adopted by the IFA, FIFe and WCF, Maine Coons are large cats with specific square outlines of the head, muscular and long body, wide chest. There is a fluffy fur between the fingers on their feet, which remains snowshoe and gives a special charm to this native breed. The tail is wide, long and bushy, it becomes narrower to its end. Its length is approximately equal to the length of the cat's body.

Maine-coon's head should be large, with well-developed vibrissae cushions (where the mustache is located), they give the cat's face a squarish shape. According to the new standard, the profile should be elongated, wedge-shaped. A piece of the cat's head transition from the forehead to the nose should be characterized by a "ladder", it should be expressed, not smooth and not straightened. The Maine Coon cat's forehead should be well developed.

Judges demand the cat's ears high-set, but it is difficult for breeders to get this effect, as the older the pet, the larger its ears, so ears just cannot be held upright. The cat's eyes shouldn't be round: they are slightly oval, set quite wide. Common Maine Coon eye color - amber, golden or greenish. Small eyes are not desirable, then the cat’s look changes, and the cat's face gets wary and angry expression.

All kinds of colors are accepted, except colored spots, like Siamese or Burmese cats have. Common colors are tabby, tortie, with white marks or a medallion, smoky, one-color, marble and others. Wide-set ears, unhealthy appearance, thin paws, short tail, almond-shaped eyes, small size are not allowed according to the standard. The optimal weight of male cats presented at exhibitions is 8-10 kilograms, female cats are a little smaller - from 5 kilograms.

One of the significant differences between cats of this breed from others is the temper: they are kind and considerate. Although Maine Coon looks more like an aristocratic and evil predator, it actually a good-natured and gentle creature. Representatives of this breed will not harm the owners or their children, they become real friends and willingly play with the kids.

Maine Coon can become a loyal assistant, it loves to be next to the owner, but at the same time it is absolutely unobtrusive. If you are busy and cannot pay attention to your pet, it will not be imposed. Such cats are very intelligent, so the owners will not face such a problem as pet tracking. These cats are very loyal to the owners, they behave calmly with strangers, without familiarity or discontent. But at the same time, Maine Coon will jealously guard its territory from the invasion of other animals, its size allows to do it.

Maine Coons are differed with a special voice, they rarely meow, their “speaking” is more like rumbling sounds. As for food, these animals aren't picky. When choosing dry food, give preference to large bits, cats swallow small bits without chewing, but this is not desirable.

A cat can sleep anywhere, it rarely sleeps with its owners, most often it chooses a place nearby: in an armchair or on a rug. Do not be surprised if you find a pet sleeping in the sink or on the floor of the balcony - lush fur will not allow it to freeze.

Representatives of this breed are very smart, they get well with other animals. They can feel the mood of their owner very well. They are very smart and playful. Even ten-years-old Maine Coon cats love to play, while other breeds become lazy at the age of 5-6. The owners of Maine Coon get a faithful and reliable friend and companion.

Maine Coon is a natural breed of cat, its habitat is the state of Maine, in Northeastern

America. The color of some individuals resembles a raccoon, and large ears with tassels resemble a lynx, so Maine coon is also called "raccoon cat". There is a legend according to which the English navigator Charles Coon took his favorite cats to travel. Representatives of different breeds lived on his ship. As soon as the ship approached the inhabited shore, the captain let the pets go for a walk. Numerous offspring that were born then were called Coon cats.

However, legends remain legends, and felinologists believe that this amazing breed was formed through the crossbreeding of short-haired cats of North America and European long-haired breeds. Thick coat and strong physique is the result of living in mountainous and wooded areas. Hunting skills developed during life on the farm, where cats hunted mice and rats.

Maine Coon breed was officially registered in 1860. Soon "raccoon cats" became known in all states of the USA. Then the fairs and competitions appeared, breeders tried to bring out the largest cat. In the 20th century, the breed fell into decay and began to revive only in 1950, when the Maine Coon Club was founded in the United States. On the 1st of May, 1976, Maine Coon became the first champion of the exhibition. Later, breeders of this breed appeared in England, Austria, Sweden, and then in Ukraine and Russia.

Make a comfortable corner for the cat. Adaptation often occurs within 2-3 days. When accustoming a kitten to the toilet, first use the same filler as breeders. Over time, the cat can be accustomed to a more practical and convenient filler.

Maine Coons are very active cats, so it would be better to determine where your pet's territory will be - install a claw-claw, and a cat complex. Do not forget to fix the structure well, these cats are quite big, so during the jumps they may break poorly fixed complex. Play with a kitten or an adult cat, for Maine Coon it is very important.

Do the required vaccinations, cut the nails only with special tweezers and not too deep so as not to injure the delicate skin. The coat of cats is very long and soft, but it does not need constant care. The coat does not get dirty and does not felt. Comb your pet once a week, and bathe it once every couple of months. A rolled up ball of wool can be carefully removed with scissors. Do not forget to brush your pet’s ears and teeth from time to time, and wipe eyes with a damp cotton swab.

Maine Coons have a very calm, even aristocratic temper, but at the same time they really do not like loneliness. Such cats choose an owner for the whole life and are very dedicated to him.